In March, 2021 Valley Corp was awarded the contract to perform site preparation, grading, reinforcement and erosion control, and excavation and installation of stormwater management (including box culverts and pipe) on an approximately 10.5 mile stretch from County Road 11 to one-half mile east of North Ridge Road at the intersection of existing Hwy 30.

The highway is being rerouted and expanded from 2-lane to 4-lane to accommodate the increased traffic and meet expectations for growth for the foreseeable future. This stretch Valley Corp is doing is the final remaining segment of the Columbus-to-Fremont Expressway System, and it fulfills the need the state identified back in 1988.
This is the largest project Valley Corp has done since the company was founded in 1972.

“As we celebrate our 50th anniversary, we are thrilled to be given the opportunity to take on such a significant project as this,” explained Matt Bevington, Valley Corp CEO. “Many of us grew up in the area and hold this highway near and dear to our hearts. We are very proud to help bring this to fruition.”

Paving the road is performed by another contractor and is expected to begin in May 2022. The goal is to have the westbound lane completed, connected to the existing section of U.S. 30 (north of North Bend), and opened to traffic before the end of 2022.

The Nebraska Department of Transportation project will move the existing highway — which currently runs through the south part of North Bend, Neb. — north of the city. The project began April 15, 2021, and is due to complete June 1, 2022.

When the entire project is completed, it will more efficiently and safely connect Fremont (6th largest city in Nebraska) and Columbus (10th largest) and serve the other the communities between and nearby.

On every infrastructure project of this magnitude, the weather can impose unexpected challenges. Fortunately, conditions have mild and manageable, and Valley Corp expects little weather-related impact going forward.

Despite facing delays to get started, Valley Corp has already moved nearly 1.5 million cubic yards of earth (early February 2022). Only 167,000 yards remain, and they expect to complete the project ahead of the deadline.

“It involves a lot of our different skillsets, with mass excavation being part of that,” said Valley Corp Project Manager Tanner Almery. “There’s also a large capacity for the utility crews being utilized on this project. We have some subcontracting work, but 85% of everything being done out here is self-performed.”

On any given day you will have 12 to 25 Valley Corp operators working on the site. The estimated man-hours worked on the project since it started is 28,574 (though Jan 31, 2022). Between Valley Corp and their on-site subcontractors, each day 15,000 and 18,000 cubic yards of embankment material is excavated, hauled, and placed to build the expressway.

261,000 cubic yards of embankment was excavated from the existing site, including the constructed wetland mitigation area and associated drainage ditches and is being used to build-up roadway. In total, 1.442 million yards will be used for the entire roadway section. The “embankment” (Sand & Soil) was utilized to build the new highway profile section and “cohesive” is placed of roughly the final 1’ to establish a “cap” for final grading and future paving over the newly constructed roadway section and “topsoil” placed on the final graded slopes for final stabilization.

Valley Corp purchased 40 acres of property adjacent to the road and leased another 30 acres to dig two lakes – using that material in building the road.

Over 550 Liner Feet of box culverts have been installed under the new road. These are used for stormwater management and site drainage. When Valley Corp’s section of the U.S. Highway 30 project is completed, over 9,000 feet of pipe will be put in place for storm drainage. 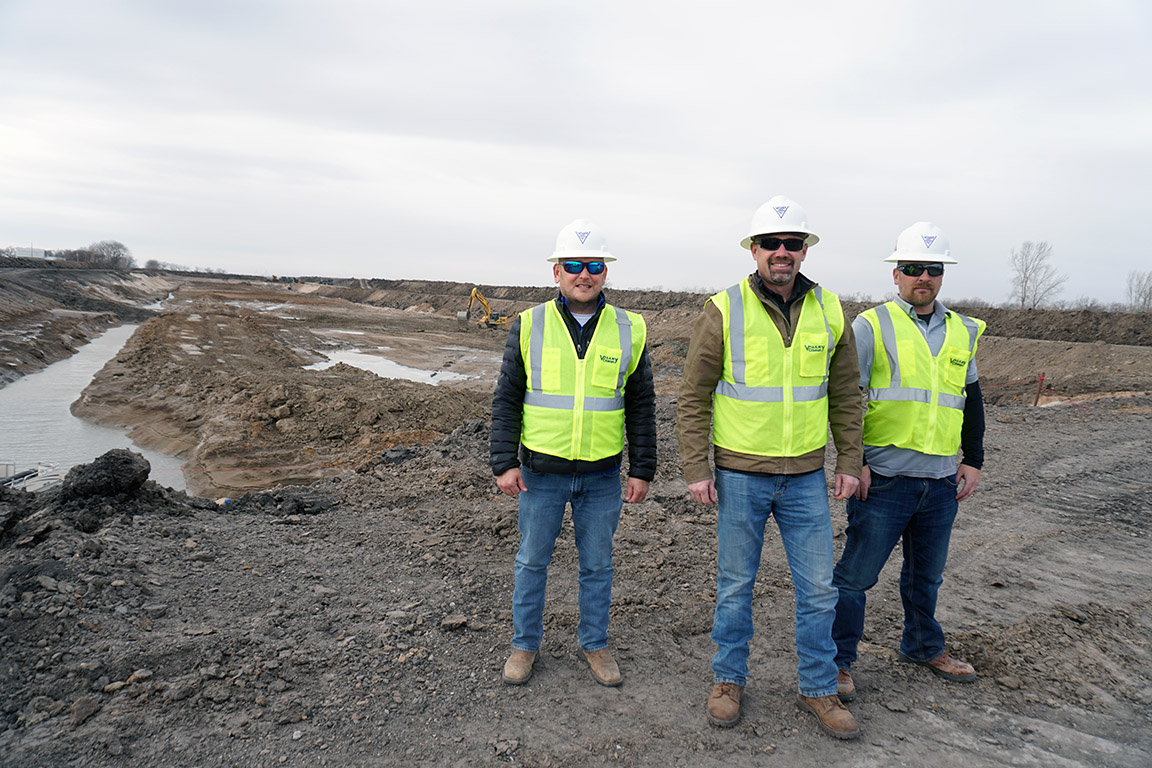 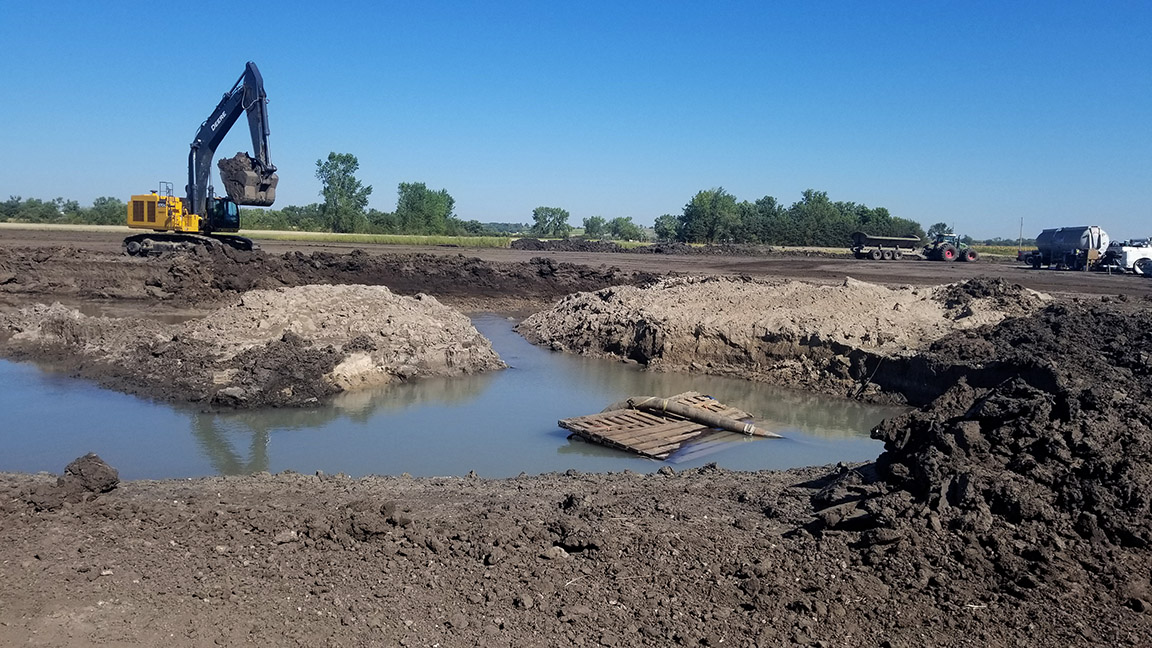 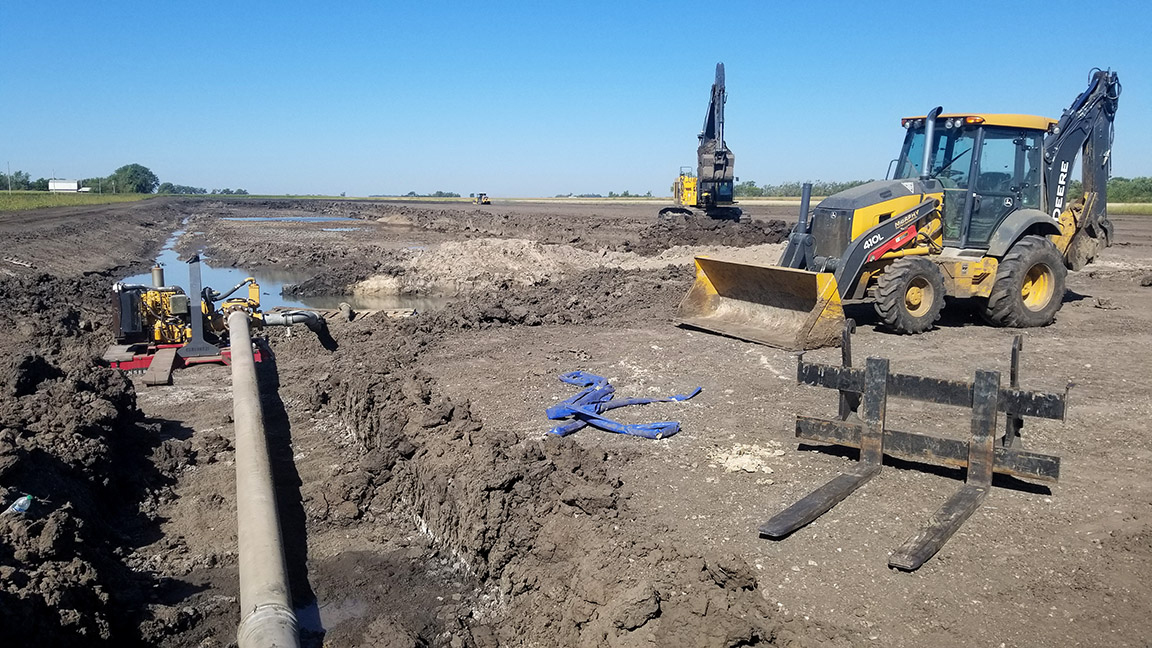 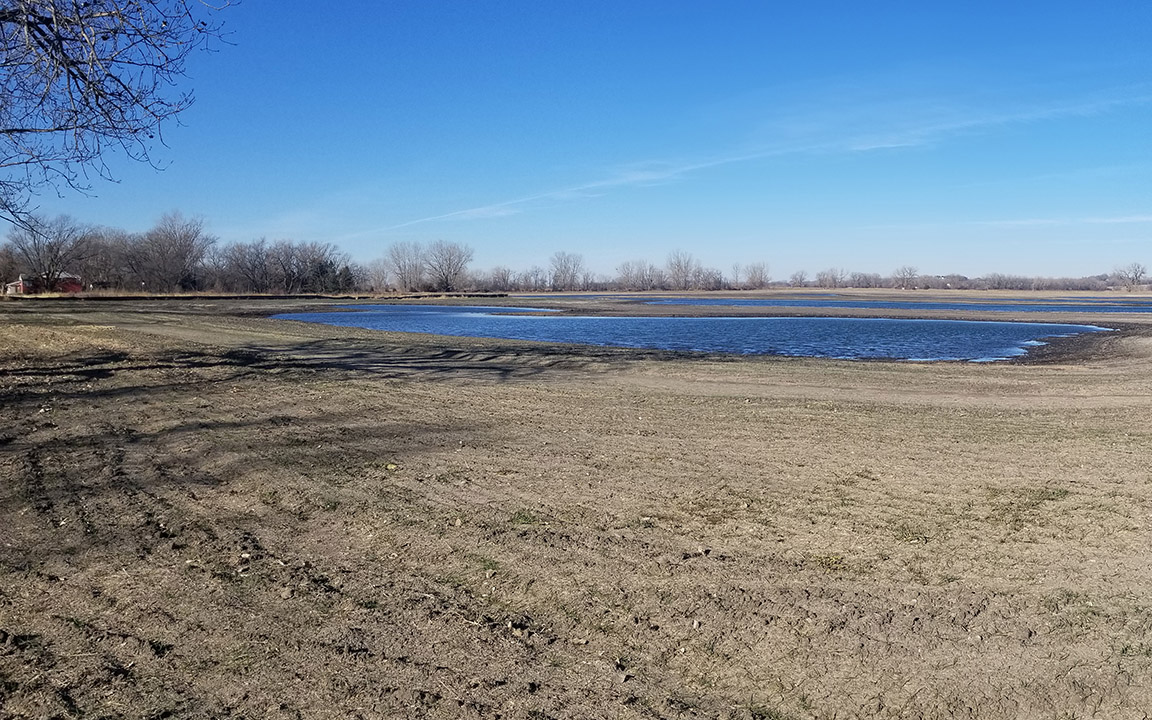 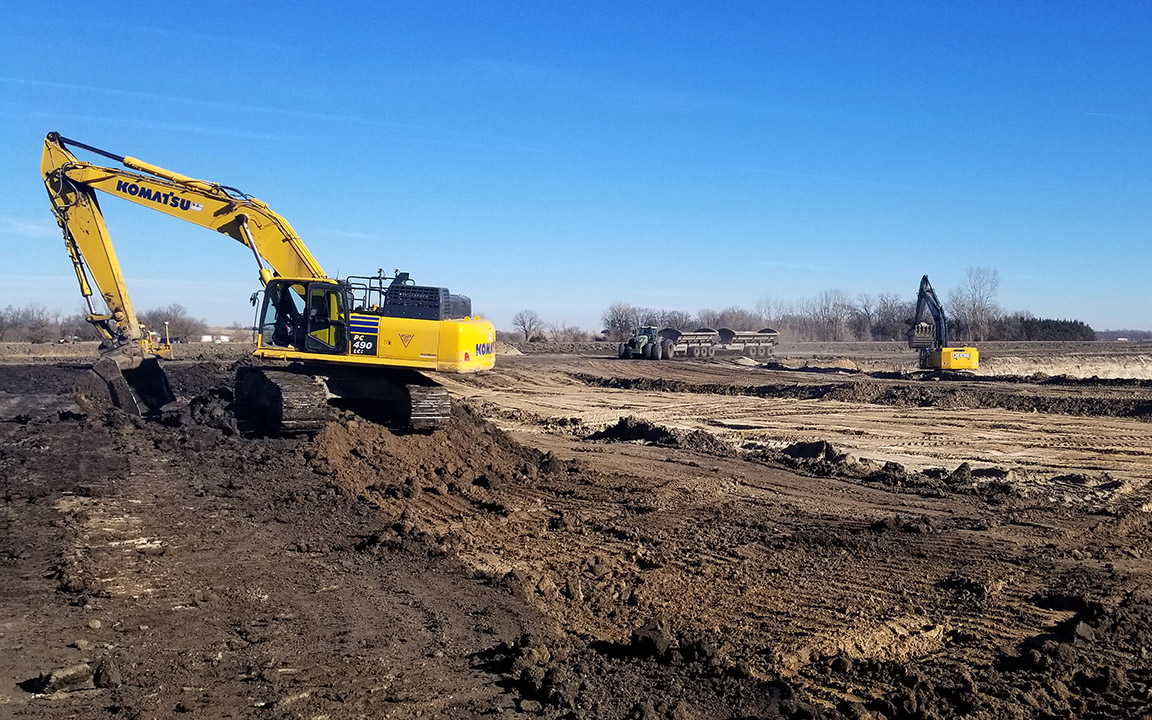 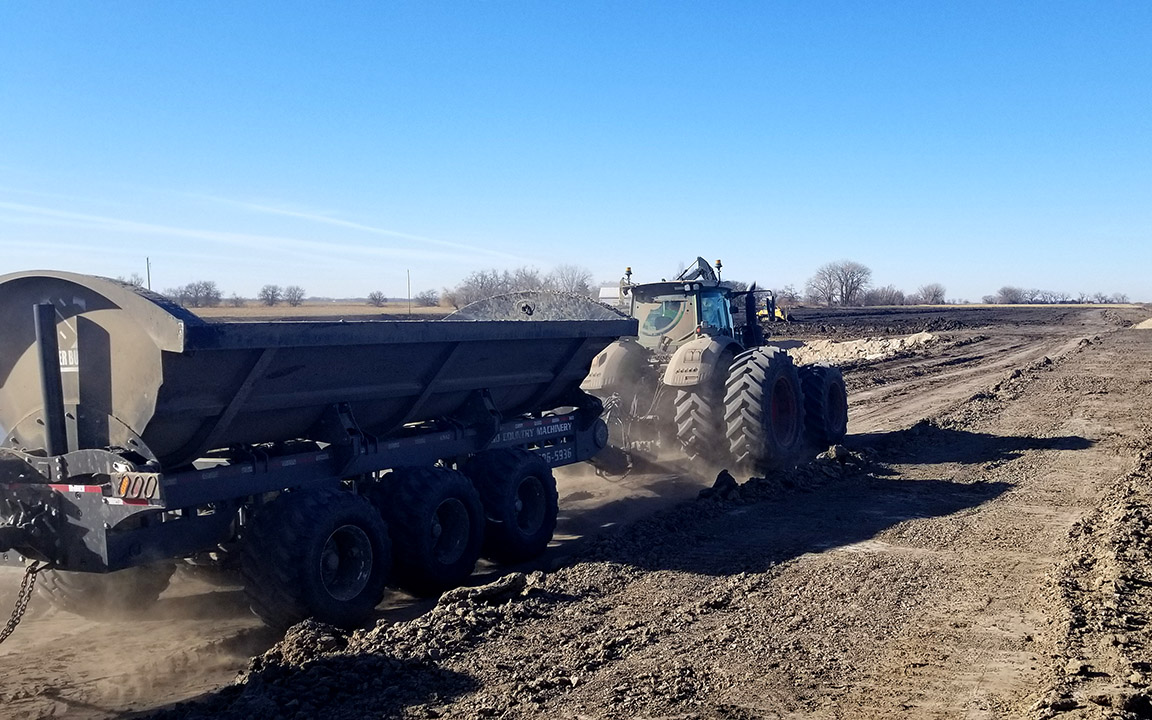 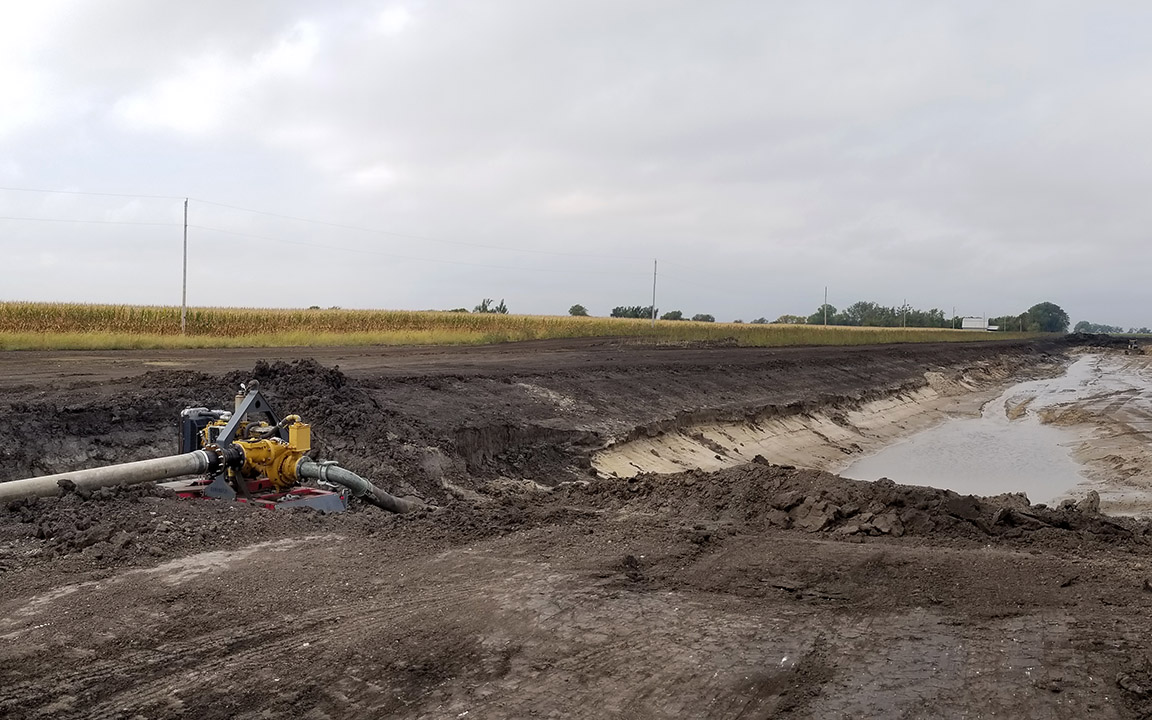 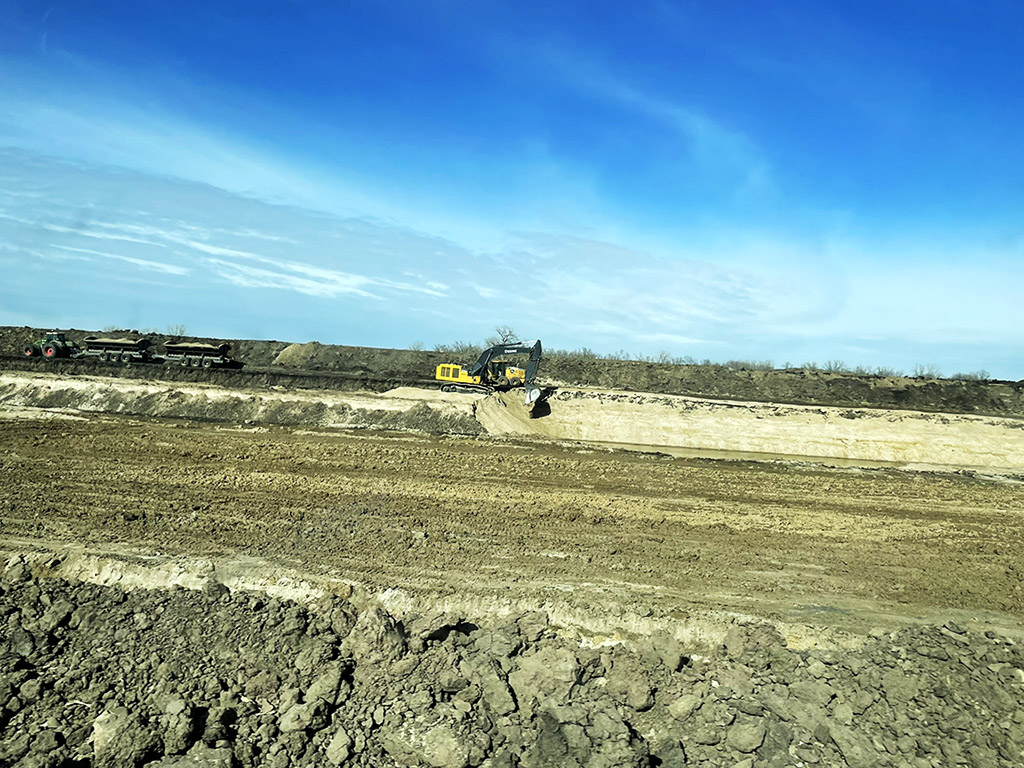 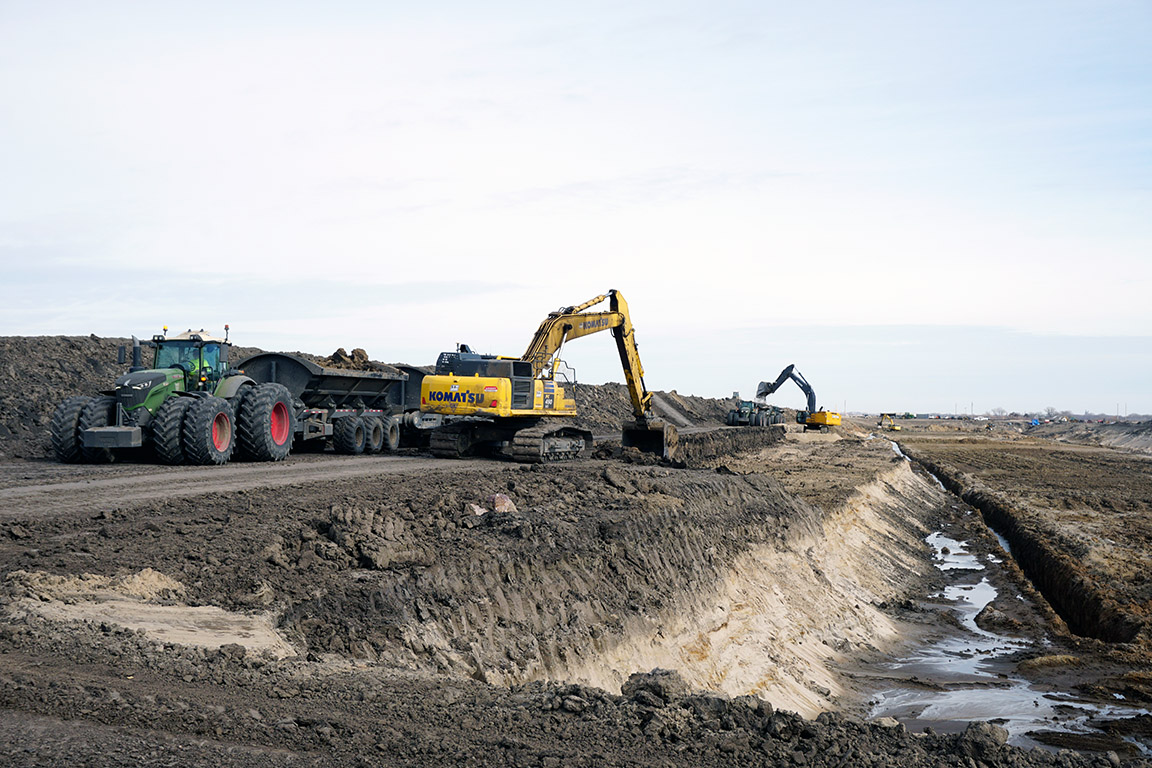 The challenge of moving 1.5 million cubic yards of dirt over soft, uneven ground to the location can be a monumental challenge. Traditional truck/trailer combinations can produce deep rutting problems and have limitations to the amount they can move in a single load. These also have speed limitations while traveling over the uneven ground.

Because of the scope and scale of this massive undertaking, Valley Corp invested over $5 million in new heavy equipment, including purchasing 5 Fendt tractors and 5 Bauer Built SD-36 side dump trailers.

“With this Tractor and trailer combo we have seen low compaction and minimal rutting going across the muddy and uneven terrain,” said Bevington. “In fact, we were so pleased with the performance, we were able to add a second trailer to our tractor units and thereby almost doubled our capacity. Seeing these tractors pull the wagons in tandem is quite the sight!”

With the SD-36, there is very little compaction or rutting going across raw, uneven terrain – and even with that increased payload, the trailer performs better in muddy conditions than standard trucks. It has a heaped capacity equal to that of a 40-ton haul truck. An innovative 3-axle hydraulic suspension system suppresses ground compaction by transferring weight to all six tires all the time, even when dumping on the go.

Not having rutting and disruption of the grade means not needing numerous other machines and operators on cleanup and leveling duty in the soft soil conditions.

Bevington said, “Our largest 6-yard bucket Deer excavator can completely fill two tandem SD-36s in only about 2.5 minutes and they’re on their way.” The tractors and SD-36 trailers are so efficient and can travel faster that the team is able to work nonstop. There are a total of four excavators loading and 12 tractor/trailer combinations running at any given time.

Between the new heavy equipment and the experienced Valley Corp crews operating them, the project is moving forward at a speed that has not been seen in conditions like these.

The project is within the Platte River and Rawhide Creek floodplains. In the spring of 2019, the area experienced its second “100-year flood event” in the last 15 years – closing miles or roads and putting numerous bridges out of service. During that time U.S. Highway 30 saw increased traffic because many nearby rural roads were washed out or damaged.

After careful review of the region, it was determined the new expressway would not increase flood elevations and the area affected by the 2019 flood would meet State Floodplain Permit requirements.

We believe our employees are the ultimate investment. Find out how we can unearth your potential, together!