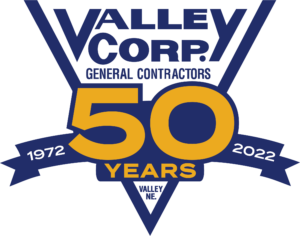 You may say Matt Bevington has construction in his DNA. As the third-generation owner of Valley Corp in Valley, Nebraska, he has been watching, working for, or running the company since his grandfather started it in 1972.

While preparing to retire from a lifelong career in the construction industry, Del Chapin (Bevington’s grandfather) was having a hard time with the idea of hanging up his hard hat. “He and my grandmother Helen founded the company as a retirement ‘hobby’,” said Matt. “His extensive experience, passion for the industry, and dedication to the people he hired started the company on a path of steady growth and success.”

A few years later Del and Helen’s daughter and son-in-law, Bonnie and Roger Bevington, had founded a similar company and in the early 1980s they decided to merge the two into the foundation of what Valley Corporation would become.

In the early 1990s, Valley Corp acquired Midwest Aggregate Recyclers, adding this valuable and sustainable new practice to its already-established portfolio. “This acquisition helped us become a pioneer in the concrete and asphalt recycling industry here in Nebraska,” Matt explained.

Over the next 20 years, Roger and Bonnie grew the business, primarily around local projects. Valley Corp was awarded the small business contractor of the year for Offutt Air Force Base in 1986, after completing numerous high-profile projects there.

During Roger and Bonnie’s ownership, each of their five children worked for Valley Corp, and Matt purchased the company in 2007. Since then, the organization has grown into a variety of different areas and markets – but the thing Matt is so proud of is the team of construction professionals and the close, family-like workplace culture that has developed.

“Over the years, we have upheld the values and ethics passed down through the generations which created a small business, family-owned atmosphere,” Matt said. “It’s wonderful to see our people happy to come to work and proud of what we accomplish together.”

Valley Corp is now celebrating its 50th anniversary in business and the future is bright for not only the company, but the construction industry in general. Throughout its tenure, the company has always had an eye on the future, incorporating new technologies and construction equipment and strategically expanding into different areas as needed.

Developing a new generation of construction professionals is another vital key to their growth and success as well. “We understand that to maintain a strong American construction industry, Valley Corp and other companies must attract and embrace the energy, enthusiasm, and ingenuity that young people bring to the labor market,” said Bevington. “They are our country’s backbone and future!”

Over the past few decades, the labor shortage in the construction industry has been widely reported by industry experts and economists. The average age of construction workers in the U.S. is 42 years old. A recent survey found 80 percent of construction firms struggled to fill positions in the last year.

Fostering the growth of a new generation of construction professionals is not only good for Valley Corp, but for similar companies across the Midwest. One way they are reaching out to young people is this is through their “Equipment Rodeo.” The annual event draws nearly 100 students from various area high schools who get hands-on experience of working in construction, including: a skid loader obstacle course; excavator basketball; rebar tying; concrete pouring; underground boring; and other activities.

To celebrate the 50th anniversary as a company, Valley Corp staff, their families, and others recently gathered at the facility for a company picnic where attendees enjoyed plenty of delicious food, playing games, a raffle, a bounce house for the kids, and excavator basketball.

As the company reflects back upon strong consistent growth over the past 50 years, Valley Corp looks forward to exciting upcoming projects and opportunities on the near horizon. “I could not be more proud of what our team has accomplished together in the Midwest, and believe we have the key personnel and vision to steadily expand to soon be among the top construction companies in the United States,” said Bevington.